As the UK’s leading theistic evolutionist, Dr John Polkinghorne started the debate with his claim that the universe had evolved over the past 14 billion years. Mackay quickly produced a copy of a 1990 lecture by Polkinghorne, where he had stated the universe had evolved over 15 billion years. It was fun to watch the audience react to Mackay’s claim that evolution must be so wonderful it has enabled John Polkinghorne to become 15 years older while the universe became one billion years younger, and then use it to emphasis the point that these vast billions of years are not facts that disprove a literal reading of the scriptures, but men’s feeble theories, which are constantly evolving while the scriptures in Genesis remain firm. 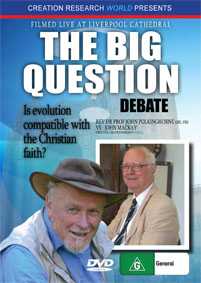