August 2019 – students, activists and reporters gathered on the summit of a dormant volcano in central Iceland. Their reason? A funeral for a glacier which wasn’t even there 1000 years ago! Yet on it’s 700th birthday, it was officially declared extinct, with man-made climate change and global warming loudly blamed for its destruction.

September 2020 – Creation Research’s ‘Indiana’ Joe Hubbard went to Iceland to uncover the truth – and film it! Climate change? Extinction Rebellion? Man-made global warming? Where does the evidence lead? What does the Bible have to do with it?

A great on-location adventure documentary from Creation Research where you can join Indiana Joe as he explores Iceland’s climate past, its fossils, volcanoes and glaciers – the full story of fire and ice! Get a Biblical perspective on climate, and gain a glimpse into the awesome power of a global flood as you experience geysers and glaciers! 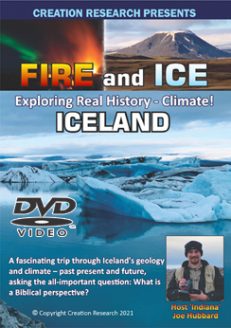