The Devolution of Man MP4

Follow the real history of the world through the biblical record of man’s inventions and technology -from the perfection of Creation, where technology was not needed ‘through to the fallen world and into today. Join International Director of Creation Research John Mackay as he takes you from the amazing ancient sky-scraping wonder of the Tower of Babel to the new Heavens and Earth of Christ’s promise. Also available as a DVD. TO ORDER DVD contact info@creationresearch.net

The ancient Tower of Babel was man’s first great architectural feat after the flood – built in defiance of God. The ingenuity of man in the ancient world is testament to the skills and intelligence instilled by God at creation. Since Adam sinned the world has been in decline disease, moral decay and death have been the result. But Jesus Christ is the way to God’s original perfection. 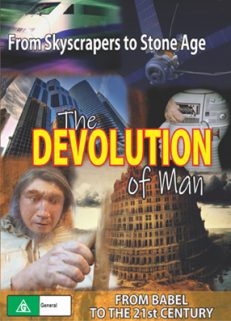