Great Debate MP4’s, timely and topical only $12.00 each – defeating evolutionists and proving creation – showing God’s Word is true from the very beginning.
Price and postage shown is for AUSTRALIA ONLY. 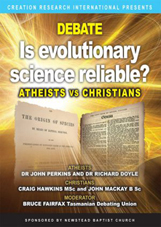 Watch For Yourself-Christians Vs Athiests On Creation Vs Evolution. The results were intriguingly commented on in the local press with “sadly it was the creationists who came out the clear winners.” (Launceston Examiner p22 Oct 5 2006). See if you agree as you join the crowd who filled Scotch Oakburn College Auditorium in Launceston to overflowing. The debate was moderated by Bruce Fairfax of the Tasmanian Debating Society. ADD TO CART 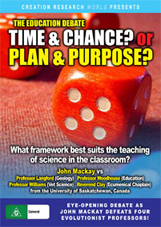 In 2 hours John Mackay defeats 4 evolutionist Professors from Saskatchewan University, Canada. Eye-opening, great for youth and classroom. This is the video that led to Creation Research being asked to prepare a creation curriculum for public school science classes. Includes question time. ADD TO CART 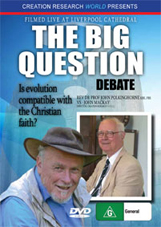 As the UK’s leading theistic evolutionist, Dr John Polkinghorne started the debate with his claim that the universe had evolved over the past 14 billion years. Mackay quickly produced a copy of a 1990 lecture by Polkinghorne, where he had stated the universe had evolved over 15 billion years. It was fun to watch the audience react to Mackay’s claim that evolution must be so wonderful it has enabled John Polkinghorne to become 15 years older while the universe became one billion years younger, and then use it to emphasis the point that these vast billions of years are not facts that disprove a literal reading of the scriptures, but men’s feeble theories, which are constantly evolving while the scriptures in Genesis remain firm. ADD TO CART

Creation Research exists to seek evidence for the Biblical account of Creation, Noah’s Flood, Tower of Babel and related subjects. We investigate and promote such evidence in order to glorify Christ and build His church. Become part of the Creation Research Support Team Worldwide and help spread God’s Word about God’s World by purchasing our Books, T-shirts, through your gifts and your prayers. DONATE NOW